So for my Advanced OOP Programming's class first assignment we started learning the "C" programming language. It is definitely interesting going backwards in languages, from starting from C# and moving backwards. Although i must say, it made it easier to understand. Using header files was new to me, but makes sense. I can tell that I am no going to like programming for Apple products though as I would much rather use languages that work on a Windows computer. I was however able to use a Compiler i found on the internet to test out my code. When we get to Objective C, it's going to be even more difficult as that programming language is built around Apple and Mac's.

Here is a pic of my first assignment. It was just a simple assignment using Floats, Doubles and printing out the sum of them. 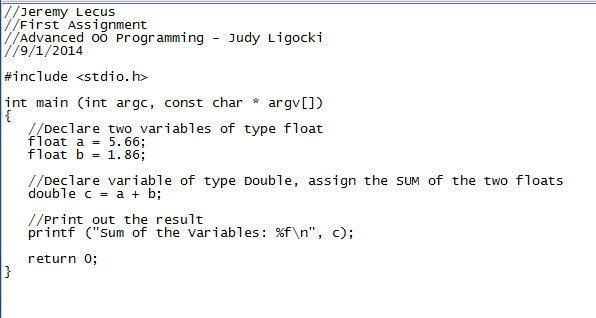