Bring on the Biz Niz!

So after having only one person on our Business team currently, our Product Owner and Lead Programmer for Raid+ Interactive came to me and asked if I could help out with some Business task's. I guess word had spread that I was doing good with Visions of Zosimos, and that I could be a great asset for this team as well. I was stoked, as I am glad that my hard work is being recognized, and that I can contribute to the team more.

After a few week's of being on the business team, the lead's had discussed that I should possibly take over as Raid+'s Business Lead position. After another week or two, Evan, who was originally the Business lead, and myself had talked about it, and went over our skills and weaknesses. It was decided moving forward that we would work cohesively, but he would be more of a Marketing Director, and that I would be more of a Community Director. He is better at the number's and analytics, I am better at customer engagement, and social media marketing. I am just glad that I can be apart of a team who's just as passionate about making video game's as I am.

Here are some of the thing's that I am doing, and plan on doing for the future of this company. It's better to start engaging our player's now. then later!

- Found out about a important, but what I think is a stupid, rule on Reddit. Apparently, only 10% of what you post, can be promotional. Which mean's only 10% of our posts on Reddit can be about Raid+. The other 90% has to be unrelated. So, if it's not, they can and will ban you. Reddit is just congested with rules upon rules. This one was a pretty big shock to me, but we have other avenues we can start with before we come back to this.

- Helped getting our Facebook to almost 200 likes now and also with getting our Twitter page to currently 230 followers.

-  Made our second survey, which ended in a pretty successful turnout with 140 survey's taken.

- Started having a Dev of the Week post on our social media sites, and dev blog to get more personable with our player's, and to have the development team more involved with them as well.

- Helped created and start building our Google+, YouTube, and Developer's Blog. All of these are currently a work in progress, but once we get thing's kicked off more, these will be some major marketing avenues for us.

- Did some research on where local co-op gamers, and couch play style gamers are hanging out at. I have a few great idea's I put together in a document. Don't wan't to spoil all my secret's but I am very excited to get thing's started! I concluded the document at the end, stating where we should move forward and how we should engage with our players.﻿

-With the research document, and all the new and fun thing's that are going to happen in the next coming moths, I also put together a Community Director Task list for the next few months so that the rest of the team has an Idea of what to expect.

There is still plenty of work to be done! Currently helping put together our slide show for Demo Day next week! Which is pretty much one of two of the most important day's in the Computer Simulation and Gaming Program. No pressure or anything .....

Want to check out most of our social sites we have up and running so far?

Check out all the Raid+ link's on the right, under the "Links I Contribute To" section ---->

So as I didnt wan't to make this post all just boring text, here is a picture of some of our card concept artwork submitted by Raid+ Artist, Jake Bezrouk! 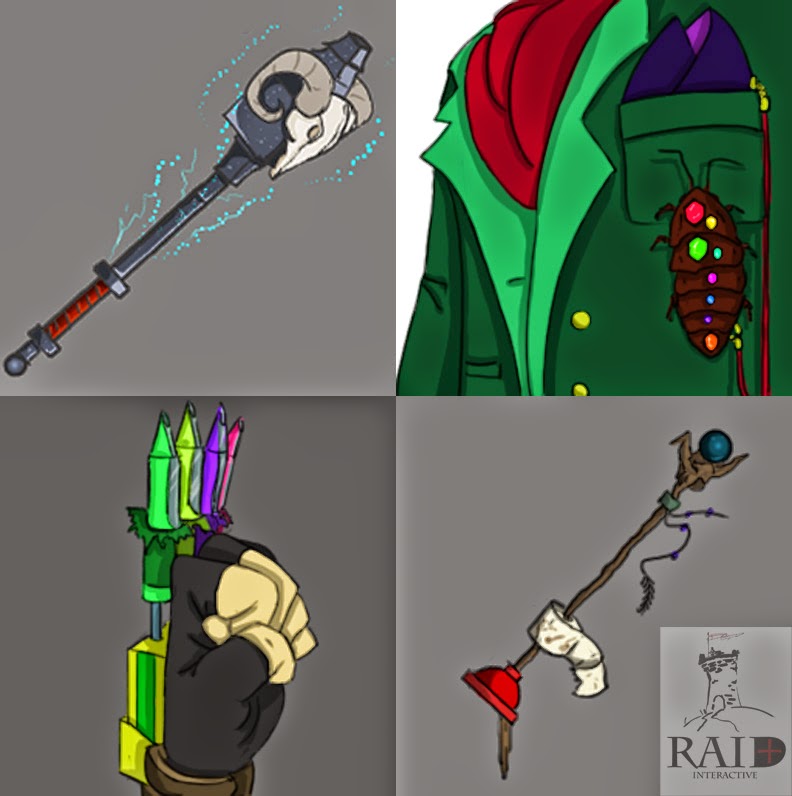