In my Advanced Game Design class we have been playing Warhammer40k to learn the game as we are going to be creating our own race to add into the already existing world as our final project. So after battling the Tyranids for the past two weeks using the Chaos Daemons and other Chaos units, we had a pretty even match the last class using our 1,000 point armies. We didn't get to finish the game as we ran out of time, and it ended pretty much in a tie as neither us of scored any victory points. It was the first time I got to see our Biomancy skill called Haemorrhage being used which was AWESOME!. We were in a pretty tight spot until we were successful with that hit. Below is the army we used in class. I was unaware that we didn't have all the models at school, and my instructor did not receive my army list in time. I made sure to give him my 1500 point army which I talk about below, way before class to make sure I have all the models my team and I will need. 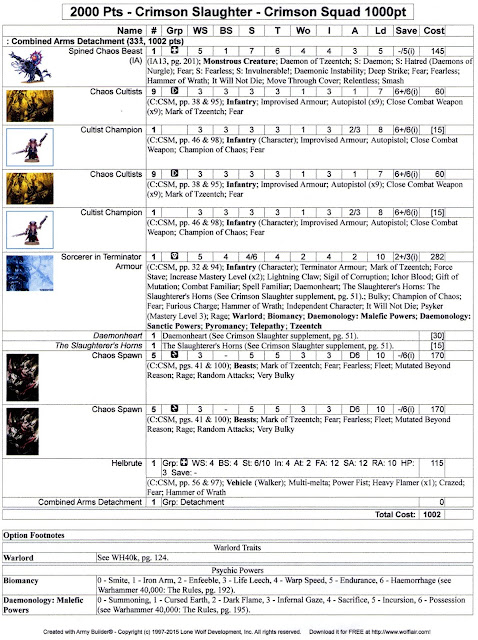 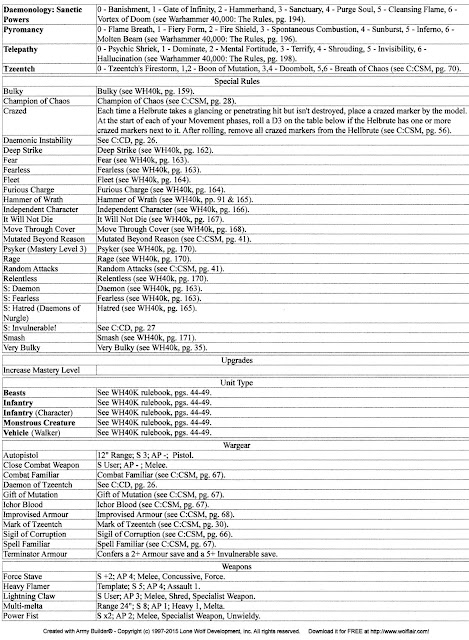 We were then tasked with creating a 1500 point army bringing in Flyers and Vehicles! I had a blast building this army, and actually made quite a few adjustments after talking with some of the other class mates. Although my instructor does not like the fact that I replaced my Chaos Cultist's with Chaos Space Marines and Bloodletters, we shall see who's army will be victorious tomorrow in class! :) Below is my 1500 point Crimson Slaughter - Crimson Squad army!

I am hoping that my flyers will be fast enough to avoid damage, and that my heavy tank and all my flamers will be enough to take over the pesky Tyranids!