Pitching to the Class

So we will be deciding as as class what we will be creating as a race for our final project in Advanced Game Design. We have to make something that will fit into the already existing world of Warhammer40k. We have to design our own codex as a team from scratch. If any of you have ever seen a Warhammer40k Codex book knows that this is going to be one hefty task.

I knew that a couple of the people in my class who have already been playing this game for a few years would have some great ideas and would probably win. I just wanted to at least try and come up with my own small pitch on an idea.

Which is why I am going to pitch that we make some sort of breed of the Demiurg race. 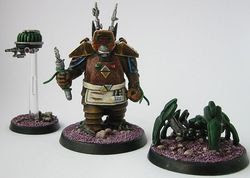 According to the Warhammer Wiki:

The Demiurg are an intelligent alien race of short, stocky humanoid traders and asteroid miners allied with the Tau Empire. They reside on the far Eastern Fringe of the Milky Way Galaxy and are also found less often deep in areas like the Ultima Segmentum. They are still an uncommon sight in the Imperium, despite the number of sightings of them having increased over recent centuries. They are almost purely space-borne in their massive and majestic commerce vessels. Their history is unconfirmed, as are their origins, intentions and current threat to others. All that is known about them is speculative at best. The Demiurg are known to have an alliance with the Tau, serving as economic allies of the Tau Empire. They were initially introduced to the Tau via their mutual relations with the Kroot. From the Demiurg, the Tau acquired their knowledge of Ion Cannon technology, which is now used heavily by the Tau in their armies and fleets. Two Brotherhoods of Demiurg, the Srry'Tok and Thurm, are known to have joined the Tau Empire outright.

I think the fact that little is know of their origins and with them being an uncommon sight, it would be cool for us to create something off of this.

We shall see what everyone thinks! :)