For my Intro. to Game Design class, I wrote about in my last post how we are to create our own board/card/dice game. I was to work with the same team I previously worked on the Skyrim presentation with. After having discussed my idea with the team, another team member basically had the same idea that I had, as he wanted to make a semi-fast paced card game similar to war.

After much discussion, we decided on making a battle card dice game, and we are calling it Bionic Mayhem!

We decided to assign each team member a specific deck to work on and that they would be responsible for that deck for the remainder of the semester. We came to a decision on 4 different elements, Combustion, Toxic, Hydro, and Quantum.

The outline of our game is similar to Magic the Gathering and Hearthstone, but a completely different plat style. Our game is going to be a prototype of a collectible card game. We will have 40 to 60 card decks built around our bionic champion.

I was assigned the Hydro deck, which I was extremely excited about. Honestly I would of been happy with any of the elements. Time to get some mechanics down, create some cards, and play test!

We brought a bunch of index cards, got to cutting, and started play testing our game from scratch, and discussed our different options and how our game should play out. 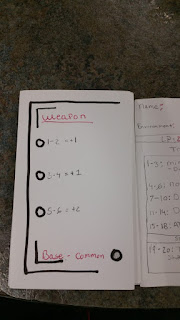 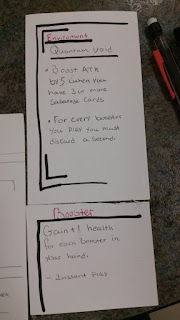