After having play tested our game between our team mates, trying out different mechanics and figuring out our rules, and discussing our different levels of the players turn.

I did get a Google+ Community set up, a spreadsheet for our mechanics, as well as a Game Design Document, which will eventually be our instruction booklet.

So basically how are game works ...

You would pick a Champion and a environment then build a 40 to 60 card deck around that style of Champion.

We came up with a cool design for the environment card. Usually at the beginning of any card game, the players usually roll a dice to see who goes first. We built off of that standard design mechanic, and added that the player who wins the dice roll to see who goes first, there environment will be used as they now have Home Field Advantage and the other players don't get to use their Environment for this match. The Environment will have 1 minor negative effect for the other players and 1 minor positive effect for the player whose Environment it is.

I also had another idea which I thought was pretty cool. How our attacking and defending works in this game is all based off of chance. For example, your weapon will have 3 traits, (1-2, 3-4, 5-6), and when you attack, you will roll a D6 and depending on the result will determine what the description states on the card for each trait, and add in the weapons base damage if it has it. The other idea I had was for our Champion card. Our Champion card has the same concept as the weapons, but this time you get a D20 Trait chart, which you will roll for a trait at the beginning of each of your turns. Considering rolling a 20 on a D20 aka Crit, is pretty epic, I changed my Champions trait rolls from 15-18, 19-20 to 16-19, 20. With 20 being the Epic bonus trait you get that round for rolling a 20.

Here is some more information from our GDD explaining the background and game. 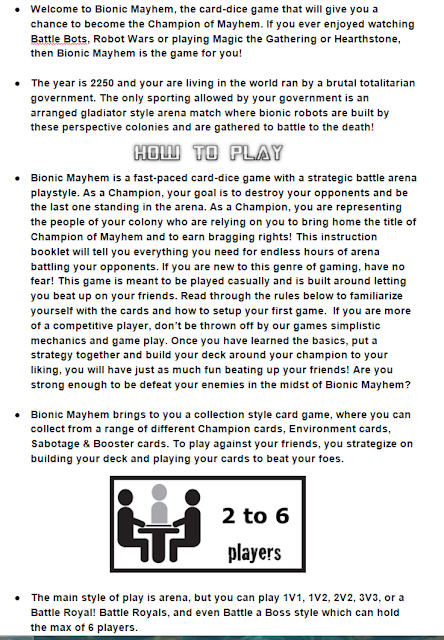