C++ Is Pretty Awesome in Unreal

So after having gone through some of the documentation showing the similarities and differences of Unity to Unreal, I started a video tutorial series for programming that Unreal had on their site. It was a 3rd Person Power-Up Game with C++.

Now, I have always preferred C# when it comes to programming, and was never really fond of the C++ and all the headers. I don't know, for some reason, C# has always been easier to follow that C++ for me.

Now like I stated before, and now that I have completed the programming tutorial video Unreal provided on their site, they really do a good job making C++ easy to implement into with your games, and make the compiling much simpler. I really enjoyed the Blueprints and can't wait to learn more on them as well.

This game pretty much teaches you how to create base pickups, which where boxes that didn't have any physics on it. There was a "battery" pick up that the character can collect and get power from, which the player has a collection sphere in which an input control of "C" is used to collect the batteries. There was also a player state created, and a HUD and UMG with a power level and descriptive text. Created also a spawn volume that can create any kind of pickup as long as it inherits from the base pick up class. 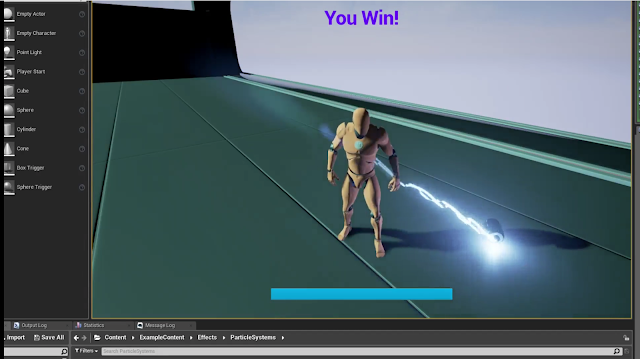 All in all, I am ready to start continuing my education and knowledge of the Unreal Engine for the time being while taking on my first task for Battle Gnomes.

Seems to me that one of the designers wants certain terrain pieces to be destructible and is having issues getting the terrain pieces to disappear. I have done something similar to this before, but in C# in Unity 3D on one of my school projects.

I am going to be loading the latest build of Battle Gnomes here, and get right to it!