It's a Hollow Kind A World Out There ...

So this week in my Intermediate Design Class, we are finishing up with the first few week of playing D&D and are at the point where everyone will have the opportunity to present an idea for our very own campaign that we would design ourselves for D&D.

From the last post I talked about my idea's, and people seemed to dig it. There were actually some really good ideas by the other team members as well. When we voted on it, my pitch idea actually made the top 4, but ultimately everyone really liked Jeff Fleetwood's idea of the Hollow World. We actually decided to take a little bit of the top 4 ideas and mash them together. 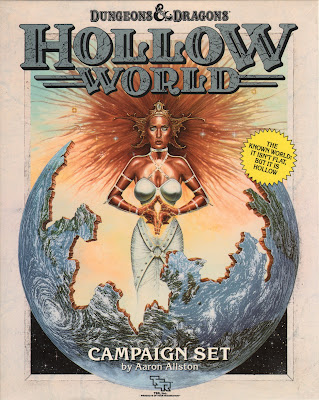 We are going to be taking other people races, culture aspects, and characters from their ideas and use them with the Hollow World idea which will take place in the Forgotten Realm era considering that is where the campaign is set currently in D&D anyway.

After deciding what exactly we were going to do for our campaign, we then wen't around and volunteered for jobs. Usually whoever's idea was the pitch that won, would be the Product Owner of the project. But considering we were merging ideas, when the time came to crown a PO, no one wanted to step up for the task. Although I wanted to get a normal position in this class, I knew I was going to have some sort of leadership position either way, but I didn't think I would be Product Owner. So after much awkward silence, I took the role of Product Owner.

This is fine with me, because now I am able to show off some leadership skills, and put this team to work, and produce a nice looking Campaign book to show off as our final project. We have a lot of good talent on our team, and most of them I have worked with before. After seeing what we accomplished with our Codex for Advanced Game Design, I know our book for this D&D Campaign will look even better. Considering most of us have been through this already.

This image here from agilethings.nl shows how important the Product Owner is ... 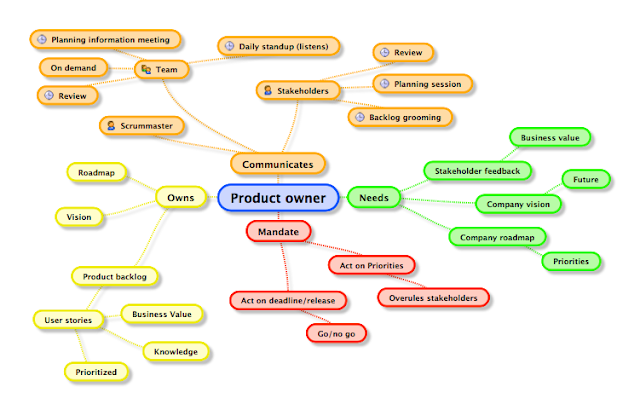 I spent the week helping set up meeting times, getting the Google+ Community section filled with information. I also set up the Teamspeak server to use for our meetings outside class. I immediately looked over the D&D book my professor gave me to emulate, and created a GDD. Getting the leads together was nice, and we talked about what we are going to accomplish on the first day of class tomorrow to get the ball rolling on this design. I also wanted the Leads to have their pipelines in order, as well as Quality Check due dates. I plan on sitting down with our Scrum Master and getting a roadmap made for the team to keep track of our time frame, and to also get our task cards up and running on Trello and making sure meeting notes are being taken or recorded. I had a few phone conversations with my Associate PO and Lead Level Designer, Jeff Fleetwood, and discussed where my though process was currently at, and talking about his ideas as well.

We also, had to read our book ofcourse, this time Chapter 4 in Level Up.

This Chapter couldn't of come at a better time to read, as it really explains a great process when creating design documentation for your games. I had no idea of the different types of Game Design document templates that really need to be created in order for you to have a successful and transparent development process. The one-sheet, the ten-pager, the beat chart, and the GDD are all great design documents explained in this chapter that I plan on using in the future of all my games that I develop.

Now I won't do everything that this book state's ver-batim, but I am going to use this knowledge, alongside with my experience, to create my own theories on game development and design. I want to be open to everyone's views and expressions, but I never want to stick to a particular set of ways of designing games. I want to design games I wouldn't normally design by myself, just like Warhammer 40k and Dungeons and Dragons. Normally you would never find me playing these games, as the only games I normally play are digital. But over the years I have learned to appreciate the amount of creativity, effort, mechanics, strategy, and design that goes into these tabletop RPG's. Next week we will get a glimpse of our GDD and really get things kicked off as a team and I will be sure to post progress!

Time to dig into some lore, watch the community like a hawk, and get ready for class this Thursday!

and Time for sprint 0! Woot! Everyone loves sprint 0!