Fall of the Forgotten Campaign

So the time has come to finally play test the game with our Professor after working on it for most of the semester.

It was actually very interesting, considering all the content we had generated, we had to squeeze in as much as we could over 2x 4 hours sessions. Which is crazy considering D&D Campaigns take weeks, months, sometimes even longer than that. With all the content we generated, to actually play through, including all the side quests and encounters, it would definitely take a few days of non-stop playing.

So how did we narrow down our campaign? Our Professor wanted to play a introduction and a Conclusion to our campaign. Below are the notes of how we broke it down, as well as some side notes of what happened during our final play testing.

I only bullet pointed out the 8 hour version of our campaign here, but if you want to learn the finer details of our campaign, just check out the interactive flip book I created and posted in a post above.

Remember ... this is NOT our full campaign, lol. Just a dumbed down, 8 hour version.

• DM Brings in the players with a epic introduction Dialogue. (Basic Map)
→ For a short version of our campaign: The Outer World is being destroyed because their Sun is being drained and destroyed by a unknown source of energy which is emerging from the Inner World. (Refer to the digital flip book linked in a post or 2 above for more info)
→ The Players are all starting off at lvl 10.
→ The Players enter in Raven's Bluff in the town's Jail.
→ Currently very bad weather outside and mid-day to night time.
→ There is a Front (Guard Encounter) / Back door (No Encounter) to the Jail. (Raven's Bluff Jail Map)
→ DM decides Guard Encounters, describing the Jail to the players (refer to book).

• The Players MUST get the Drow out of Jail.
→ No Option of leaving her their, for our shorted version. (Refer to book on how the players can free the Drow)
→ Once they have the Drow, they must exit the Jail and Raven's Bluff. (Heading West)
→ Guard Encounters 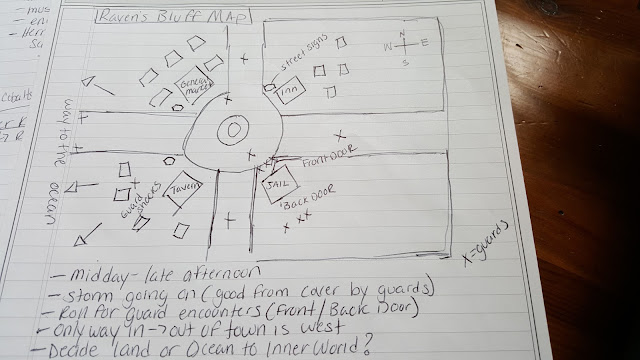 • Getting to the Coast (West)
→ In the Campaign there is 2 options to get to the Inner World, but for short reasons, the DM had told the player (Philip) that we will use the option by sea.
→ Once the players arrive at the Coast, Only 2 out of the 6 Captain's will take them to the Access point after figuring it out through conversation. DM decides. (Fast-forward to coast after players make it out of Raven's Bluff)

Emil of-course tried to raise a couple of the guards from the dead, which he actually ended up being successful on one of them. One of the players tried putting the guard to sleep but couldn't roll to save his life, lol so finally someone knocked out the Guard and took his keys. They were able too sneak out of Raven's Bluff actually without any issues however.

Getting to Arkina (the Inner World)

• Approaching the Coast line
→ DM decides time of day and weather.
→ Raven's Bluff to Coast, 3 days either by foot or horse.

• Approaching the Access Point
→ Once the players reach the portal, they will battle a Kraken. (Ship Map)
→ The players can't kill the Kraken, but it is up to the DM to decide how the players will battle through the fight all while being dragged into the access point into the inner world.
→ Examples: Badly damaged ship, kills some of the crew, etc.

They players had a lot of fun messing with each other. Emil managed to get the Prince under a spell and had him under his control which the Price (Andrew) was not happy about, lol. As the the DM it was funny to see them struggle against the Kraken, although everyone was scared to grab onto one of the Ballistas the ship had.

• DM brings the players in through dialogue as they wake up from previous battle. (Shore Map) (Orim's Bay)
→ (Where the players ship is wrecked after they wake up)
→ Thick forest to the East (Gregasi Jungle), Players can only go North or North West as the water is to the west.
→ The players wake up dazed and confused. DM Describes the setting.
→ The Sun is ALWAYS there in the Inner Realm.
→ A Loud noise wakes the 1st player with initiative.
→ Players will encounter 1 T-Rex at first, then a 2nd will join, and then a triceratops.
→ The "Hermit" character appears and saves the players from the above encounter.
→ The DM describes the Hermit to the players, and acts as the Hermit NPC.
→ Hermit enforms the players about Korotikua and proceeds to take them their.
→ It's up the the DM when the Hermit comes and goes from the group.

It was funny to see them struggle after waking up, running up tree's and trying to freeze one of the T-Rex's in the water, lol. One of the players actually was able to climb the tree, and jump on top on one of the T-Rex's!

• DM describes and introduces Korotikua to the players.
→ 3 Entrances to Korotikua (Hermit takes them to the Foreign Quarter Entrance)
→ Hermit tells the players Korotikua will hold the information they seek.
→ 1st location for information, Toads Delight (Bar)
→ Players talk to many of the town folks for information.
→ The Inner World inhabitants know something is going on, but they don't understand that it's destroying the Outer World.
→ Eventually the players are approached by a man who offers to tell them the information they seek in return for them to act in a play for his majesty.

• Hojo's Manatee (Map)
→ This is where our introduction SHOULD end. (If we make it this far)
→ The DM will refer to the play and quest referred to and described in the GDD or Book and have the player.

This part was a lot of fun, although we didn't get a chance to REALLY experience Korotikua like we wanted. Although we actually ended up creating a RPG inside of an RPG, as one of our Content developers created a Play that the DM would make the players act out. We tried to get to this part in our campaign when we play tested it with out Profressor, but we just didn't have enough time. I even had it printed out and ready to hand to the players! 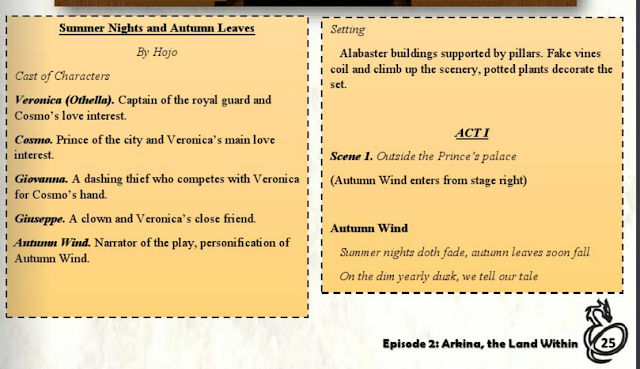 • End of Campaign begins when the player's wake up from the tragedy at the Library.
→ Refer to the Book for more information.
→ One of the players received a "map" while in the Library. (Hand players Map)
→ Episode 4 Starts, and the DM dialogues the players in, telling them of the Nature Preserve's Temple of Ka is where the Emperor (aka Hermit) has retreated too.

• For short testing purposes, the players are separated into 2 groups. (We rolled to split groups randomly)
→ The group our Professor ends up with, will be the one that is acted out, until the player's all meet up again.
→ 1 Group ends up in the Desert, encountering a Giant Worm.
→ 1 Group ends up in the Jungle fighting a Displacer Beast.
→ Group with the lowest amount of people will get the NPC Malvyr to join them.
→ Follow the GDD for encounter possibilities as the players journey to Ninesrah.

• Final Boss Encounter
→ Refer to the Book for this one as it is very descriptive with multiple different ending possibilites.

All in all, even with the short time frame of getting to create our own D&D Campaign from scratch, I think we did pretty well. The Professor had a really great time as well, which means we didn't do that bad! :)