So due to the nature of what I work on for the game we are making called Visions of Zosimos, I am not allowed to show very much at the moment as most of my task's are under NDA. However we are making really big changes with VoZ that I know that our player's will be excited about from the design, GUI's, and more.  I am currently working through fixing up the Fire Cards at the moment with a variety of issues or thing's that need to be changed or fixed, Terrain Cards, Glyph Cards etc. After that we (programmers) are moving onto the Earth Cards and so on and so forth, making as many updates and or changes as we can before Gen Con 2016! Unfortunately it's not looking like I am going to be able to make it to Gen Con 2016, although I am going to try my hardest. It's looking pretty slim due to my wedding being just a couple weeks after Gen Con.

Now that I am officialy not having to do a MILLION and 1 different things each week that I am done with school, and have been using the last couple weeks to clean up and re-organize myself, (and also getting some Wedding planning done :) ), to get back into the grove of things. Also, because I am a clean freak and after years of school projects on my 2 computers, it was time for a nice clean up.

Although very time consuming, I still haven't gotten it ALL done, but I am mostly done for now.

Now that I have a little more time, I can focus on VoZ and understanding the Hero Scripting Language better. We just brought on a new programmer who is really good, as he's been using the HSL for years now. It's nice to have other programmers their to help, and be able to learn from when you are trying to learn a new language.

We also have a lot of exciting news outside the good ole' programming world of VoZ ...

A message from our Leads at Visions of Zosimos about the Campaign:  "We have been getting some questions about our IndieGoGo campaign and what it will entail when it launches on June 3rd... The short answer is, it will be similar to the Kickstarter we ran last year, but with some differences. You can see the visual breakdown of each tier in the attached photo. We will be releasing more info over the next weeks leading up to the campaign." 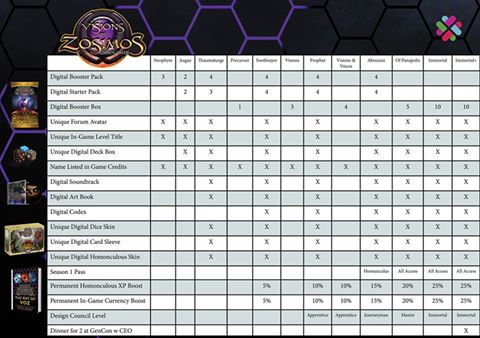 As soon as I have a link for the actual Go Go page, I will make sure to post it here.

Check out this "The Vision" trailer!

Don't forget to check out our Developer's Blog HERE for more information !