Great Time to be a Nerd

Time for my recap on the past couple weeks to make sure I am not missing anything and to get it all out there! It's been a busy one as usual, but what's new right?

So as I mentioned in my previous update, I was going to beat the game Outlast on a LIVE Twitch Let's Play in the dark, and I did it! It was a really fun game and I am so glad I finally got the chance to play it. I only put mature audiences on this particular game due to the graphic content in the game. And well let's be honest, I wasn't quite sure I could hold back swearing while playing a game that is meant to scare the crap out of you. There are not many games I have literally almost jumped out of my chair playing, but this game is one of those games. Especially when you're playing it with surround sound headphones and in the dark with the volume turned up. Highly recommend checking it out! I know I can't wait till Outlast 2 comes out! :) You can check out the let's play on Raid+'s Twitch channel right now or even on our YouTube page as we release videos these next coming weeks. Click the image below to take you there! 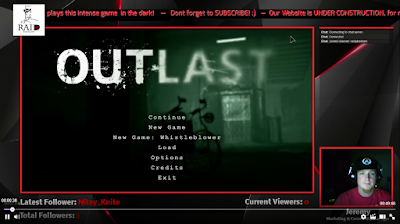 I haven't decided yet on what my next Let's Play is going to be on, but I will be announcing and planning for that very soon. I am thinking I want to go old school retro, but I have to purchase a capture card first before that happens.

I also recently backed and supported two of my friends Kickstarters which were both successful! I always love supporting friends who share the same passions as I do. Huge congratulations to those two! Can't wait for my game and comics! :) You can check out their Kickstarter by clicking on the images below. 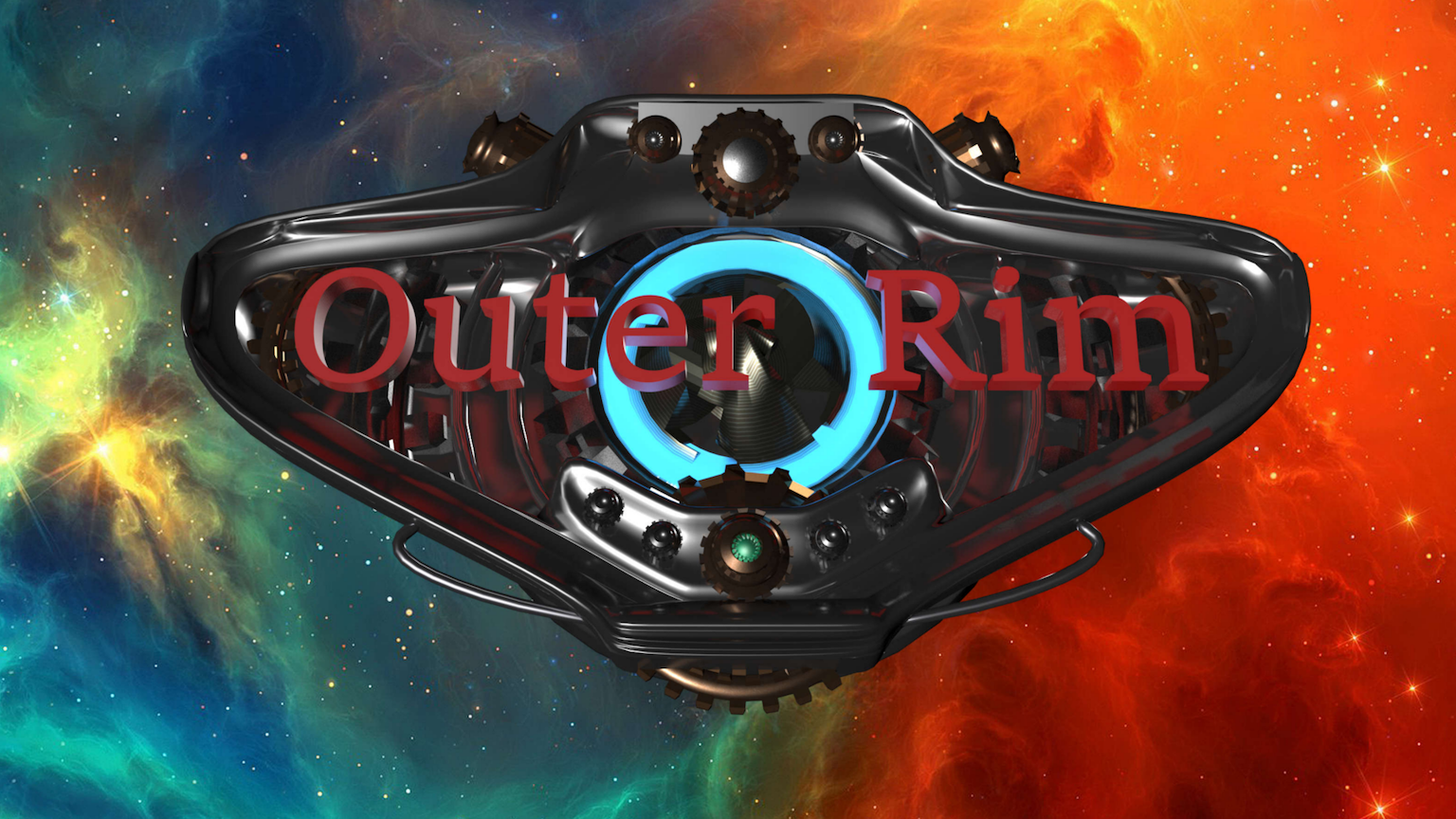 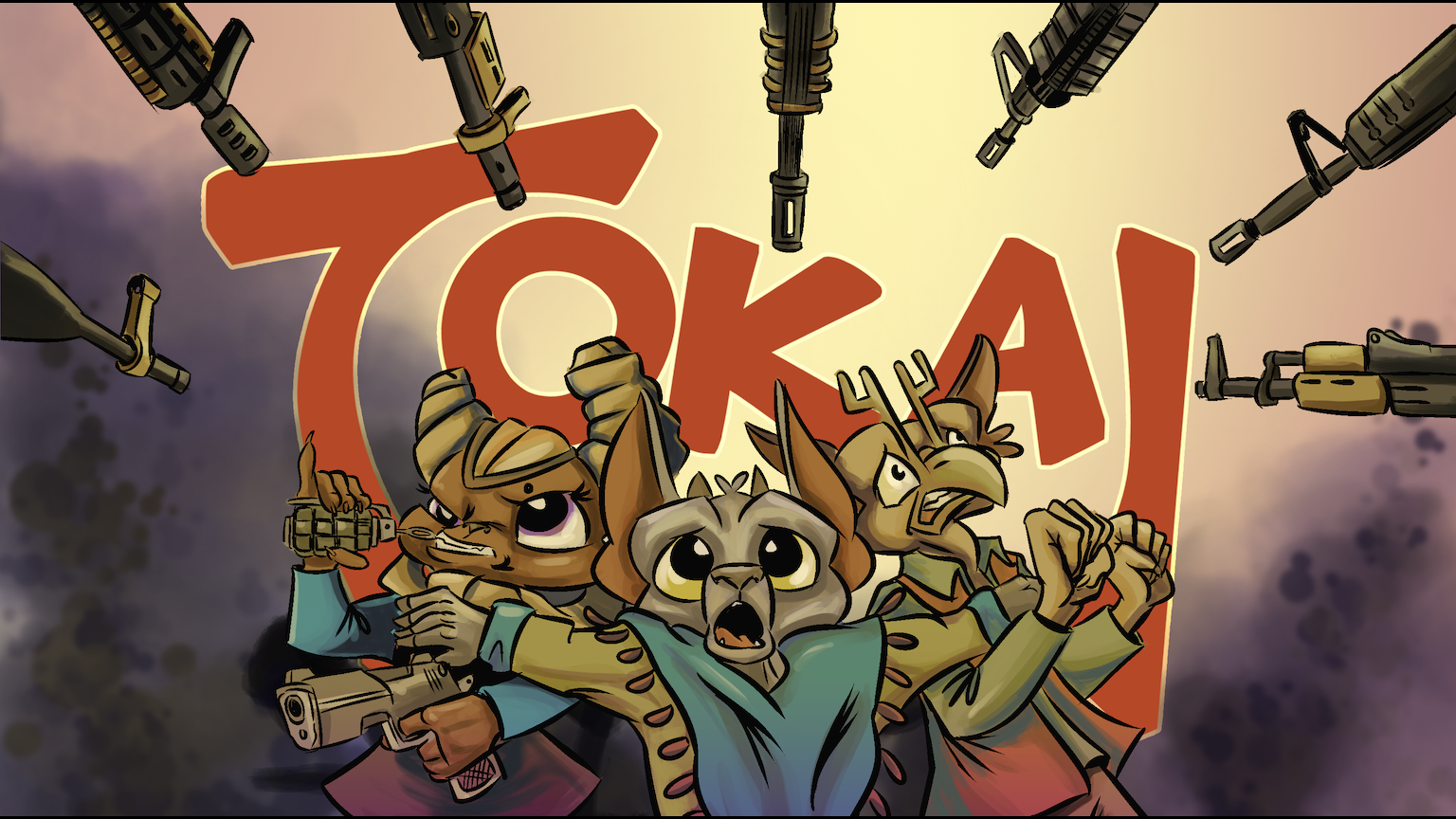 As I talked about in my previous post, I had a lot of charity work coming up. I had a really good time helping out the Michael's Helping Hand's foundation and the Chaloupka family with volunteering my time to help set up and unload cars for the Memorial Craft Fair. Never set up an inflatable flailing arm tube man before, that was fun, lol. It was held in Delafield, Wisconsin full of  wonderful crafts, raffles, and even a silent auction. This would be my 2nd year in a row volunteering my time ever since my good friend and fellow game developer passed away. I not only do this in the honor of a great friend but for all the kids the foundation helps. Enjoy some pictures from the event as I was setting up over a period of a couple days. If you want to know more about the organization, feel free to go to http://www.michaelshelpinghands.org 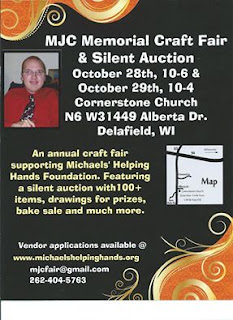 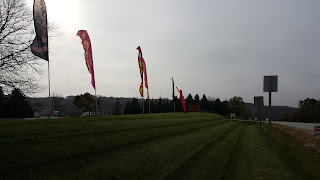 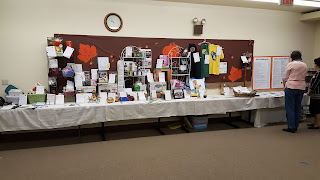 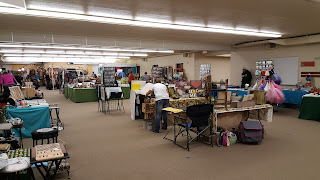 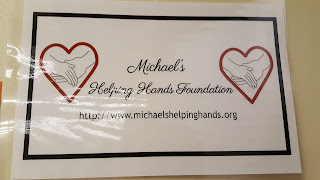 I also recently donated to my cousin's charity he holds every year, handing out tons of goods (canned foods, hand warmers, gloves, scarfs, etc.) to the homeless in the wintertime as well has free hot chocolate and coffee. It's good to see that I am not the only kind-hearted soul in the family! :) It's not a part of any organization, he just does it out of the kindness of his heart with the brutal winter's we have here in Wisconsin. You can check out his GoFundMe by clicking on the image below. :) 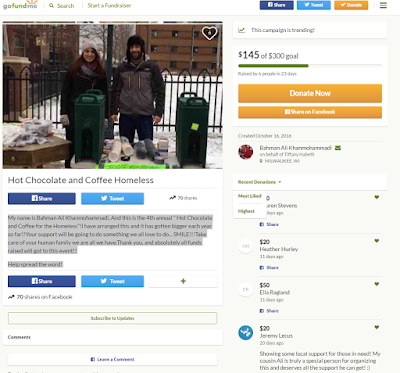 For my third year in a row playing games for 24 Hours LIVE on Twitch once a year while I raise money for the Children's Hospital of Wisconsin through Extra Life.

Extra Life unites thousands of players around the world in a 24-hour gaming marathon to support Children's Miracle Network Hospitals. Since its inception in 2008, Extra Life has raised more than $22 million for local CMN Hospitals. Last year all the gamers who played for them raised over $100,000 just for the Children's Hospital of Wisconsin alone. At the moment for 2016, there are 487 gamers playing this year for the Children's Hospital of Wisconsin and have already raised $93,602.50! That really is truly amazing and I am very glad to be apart of it!

I myself reached 150% of my goal ($500) by raising a grand total of $750 this year in just 24 hours! I am so grateful to be surrounded by great family and friends who were able to support me this past weekend. I had a blast playing Diablo III RoS and Overwatch! I don't usually get to play games throughout the year. Only when I am making a Let's Play, or once in a blue moon when I need to blow off some steam, which is another reason I look forward to this event. It gives me a legitimate reason to play games instead of developing or working on my own work. I already can not wait until next year! 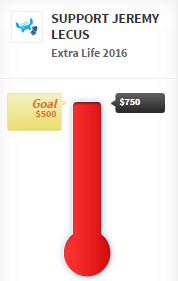 You can check out my 24 hour LIVE stream on my Twitch page. Just click on the image below to head on over to my Channel. Don't forget to subscribe! :) I will be highlighting, editing, and uploading them to YouTube soon, for now you can watch them in my Past Broadcast's. 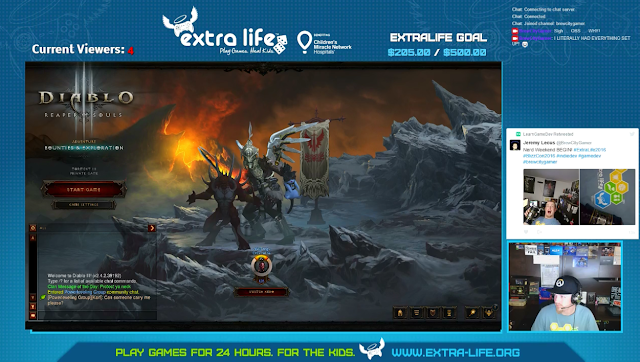 The only issue I had this year was with my stream quality and issues getting it to a good quality. I had updated my OBS from classic to studio recently and I am not quite sure if that had something to do with it. I did a lot of research and made sure all of my setting were set up properly. I ended up having to switch servers on Twitch from Chicago to New York to Dallas all night every time my quality went bad. I am going to be looking into this in the future before my next stream.


Purchased a new webcam for my streams and for the Local MKE Game Developers Night. So far it's pretty nice and I am happy with my purchase. If you're looking for a webcam to stream with I highly recommend either the c922x that I purchased or the C920. 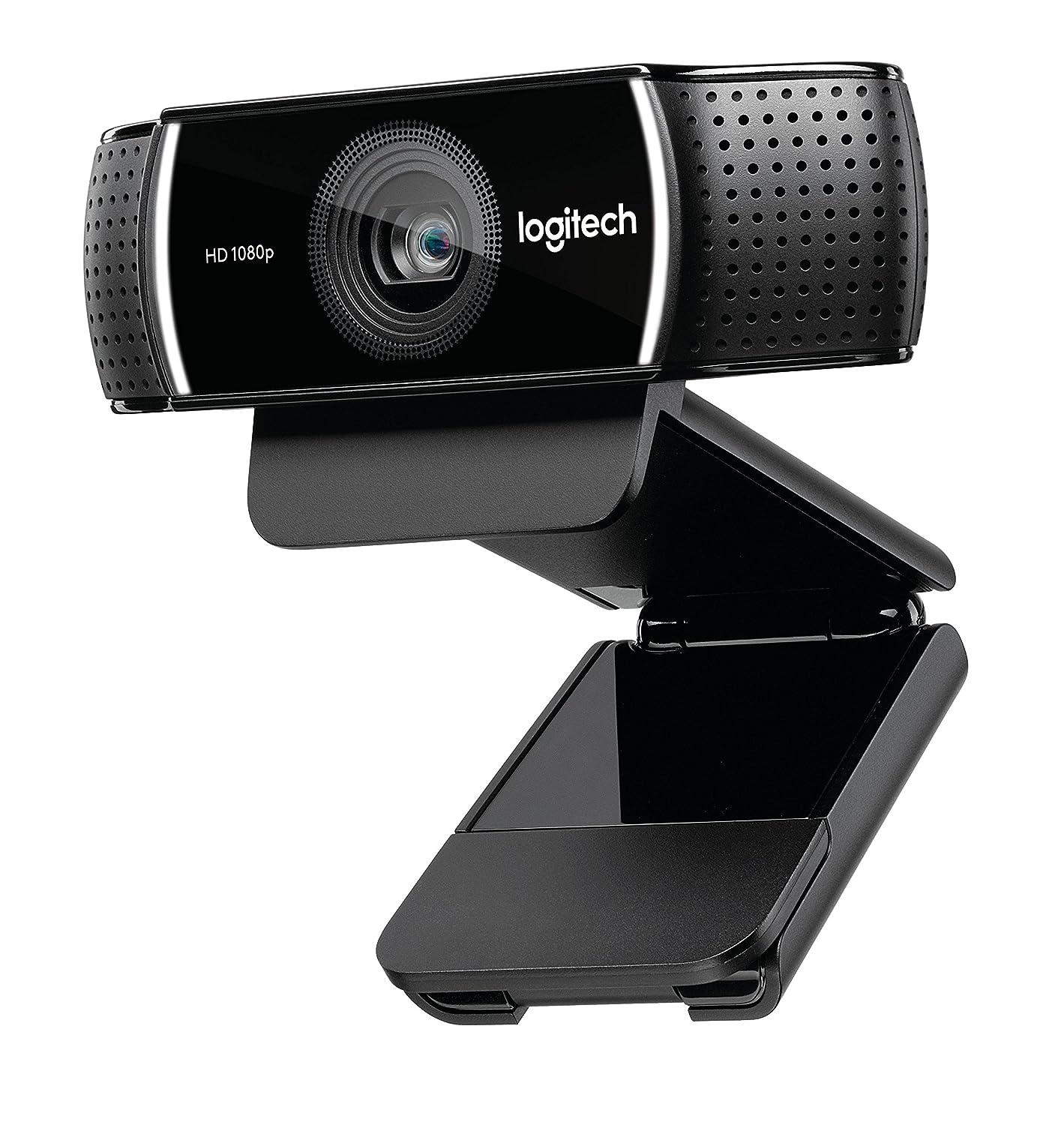 Got my official Lootcrate T-shirt as well as my Negan's Slugger's Walking Dead T-shirt just in time for the Season 8 premiere! The wife and I love us some Walking Dead! :) It's been a really great season so far! 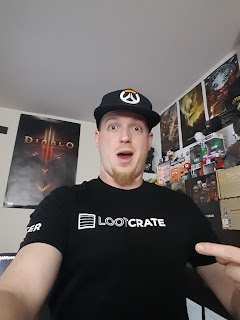 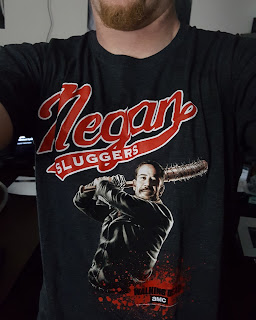 I had mentioned before in my previous post that I was going to be attending the next Madison Games Alliance meet up. Unfortunately, however, some family matters came up in the past couple weeks that I need to attend to tomorrow instead. I will keep an eye out for the next event, as this is something I would like to do on a regular basis. Love to network and converse with other developers outside the Milwaukee area, and Madison has a lot to offer for this.

We have the 3rd monthly Local MKE Game Developers Night coming up for Raid+ Interactive at the 42 Ale House! These events are always ton's of fun and I have of course been doing the usual marketing on social media, emails, and getting together some marketing material for the event. We do LIVE stream the event on our Raid+ Twitch page, but if you ever miss the event we do keep the videos on our Twitch as well as upload them to YouTube.

Other than that things at Raid+ have been a little weird lately. Not in a bad way or slow or anything, just seems like that some of the team members have a lot going on in their real lives which are causing impediments. Which I can obviously relate too! However, this hasn't stopped us from producing work! We have decided to move forward with working on another game idea we had in the freezer, as a crucial team member took hiatus on the current project we are working on. I don't want to spoil anything yet, but we will be showing off a very EARLY pre-pre Alpha at this week's Local MKE Game Developers Night. So as I finish up getting our Marketing at a good place, I am also going to be jumping in and helping with programming and design for this new game! I have downloaded the most recent Unity build and currently playing around with it, reading over some of the already written code, and reading the game's Wiki which our CEO has been filling out. Going to be another busy couple weeks! >.< But I'm excited!

In other news, BlizzCon was this past weekend as well! My best friend was able to attend (considering he lives right there) however with me being stuck in Milwaukee, I was only able to attend with a Virtual Ticket. Which was actually REALLY cool! I am very glad that Blizzard was able to provide the rest of the world who couldn't attend an opportunity to be a part of it. The announce a lot of awesome updates for Diablo III, the Overwatch League, and even releasing StartCraft II API for AI researchers to study partnered with DeepMind and Google. Some of these are really HUGE announcements for the future of games and it was really exciting to watch. Between BlizzCon and Extra Life, it made for a really great weekend! 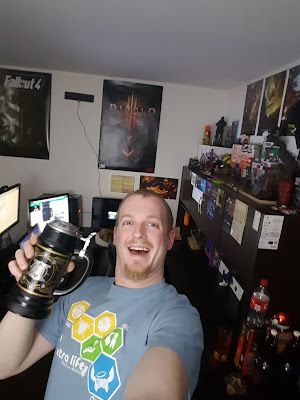 As I am still currently in the middle of interview processes at two different companies, I am still studying and preparing myself for the jobs on a daily basis. Below is an image that I came across again while I was studying (which I have seen before) but I wanted to share with you here. It really is an awesome way of explaining the feedback loop in video games and helps show the process involved. 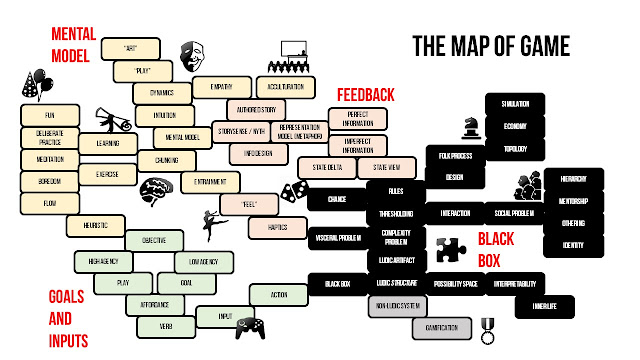 I recently bought 2x new books to read over the next week or two to improve my skills at not only becoming a great game developer but a leader as well. I am almost done with Reality is Broken, and am going to start and finish the next 2 here soon! These books came highly recommended and had great reviews. Keith Fuller I've met in person a couple times and I had to buy his book to show some support! :) Next time I get the chance to see him again I will have him autograph it! 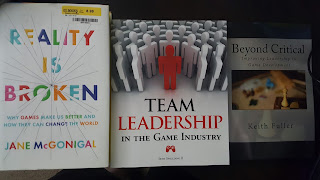 I am also still working on completing those Stack Social courses I had mentioned in previous posts regarding building 6 mobile games in C# using Unity to freshen up before I begin working on Raid+ task's and to keep improving my Unity and programming skills.

I also recently talked with my best friend about attending GDC 2017. We have a game plan basically at the moment, all though I personally do not know whats going to happen with me in the next few months as I look for a job. I DID apply for a CA position at GDC in hopes that I could be apart of helping run the event. That would be really cool! >.<

On another note, as some of you may know, with everything I am doing in the local Milwaukee Indie game development scene, I also still have to pay the bills. I still currently bartend at Bonefish Grill in Brookfield as I have been all throughout college. Recently I just received Employee of the Month again! 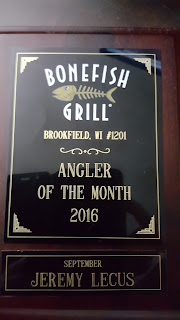 Even though some would consider it to be just merely a service industry job, I don't think anything less of it. I get to practice my communication skills in a professional setting with tons of GE employees and other businessmen or women at the bar. I have made some really cool Linked-IN connections just from working behind the bar. I treat my job just as I would with any other job and I always make sure to give it my best effort. It amazes me that even though I am extremely busy working on achieving my career goals of becoming a game developer, I still work just as hard bartending and it's nice to be recognized for that.

Time to get back to work!